I was just commenting to a friend yesterday how many blogs I read are reposts of stuff the authors saw elsewhere and how my blog is rarely reposts of others’ writing or videos. I went back through my blogs and found a couple of times where rather than writing, I’ve directed readers to something else (Bunny Foo Foo, et al). Mostly though, my blog is my own. However, I read something today I thought so concisely stated my thoughts exactly, I had to post it here. I’ve included the link at the end of the post if you would like to go to the original page.

“It would be difficult to identify a President who, facing major international and domestic crises, has failed in both as clearly as President Bush,” concluded one respondent. “His domestic policies,” another noted, “have had the cumulative effect of shoring up a semi-permanent aristocracy of capital that dwarfs the aristocracy of land against which the founding fathers rebelled; of encouraging a mindless retreat from science and rationalism; and of crippling the nation’s economic base.”

Now in all fairness, historians should wait a while before passing judgment on a president’s who served recently, much less one still in office. But the current incumbent is a special case. After all, 81 percent of Americans, according to a recent New York Times poll, believe he’s taken the country on the wrong track. That’s the highest number ever registered. The same poll also says 28 percent have a favorable view of his performance in office, which is also in Nixon-in-the-darkest-days-of-Watergate territory.

But, as George Mason University’s History News Network reports, the historians have a different measure. They want to stack him up against his forty-two predecessors as the nation’s chief executive. Among historians, there is no doubt into which echelon he falls–his competitors are Millard Fillmore, James Buchanan, Andrew Johnson, and Franklin Pierce, the worst of the presidential worst. But does Bush actually come in dead last?

Yes. History News Network’s poll of 109 historians found that 61 percent of them rank Bush as “worst ever” among U.S. presidents. Bush’s key competition comes from Buchanan, apparently, and a further 2 percent of the sample puts Bush right behind Buchanan as runner-up for “worst ever.” 96 percent of the respondents place the Bush presidency in the bottom tier of American presidencies. And was his presidency (it’s a bit wishful to speak of his presidency in the past tense–after all there are several more months left to go) a success or failure? On that score the numbers are still more resounding: 98 percent label it a “failure.” 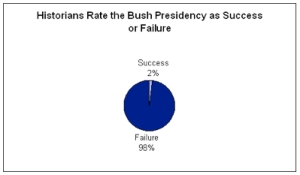 This marks a dramatic deterioration for Bush. Previously he wasn’t viewed in the most positive terms, but there was a consensus that he wasn’t the “worst of the worst” either. That was in the spring of 2004. In the meantime, Bush has established himself as the torture president, the basis for his invasion of Iraq has been exposed as a fraud, the Iraq War itself has gone disastrously, the nation’s network of alliances has faded, and the economy has gone into a tailspin–not to mention the bungled handling of relief for victims of hurricane Katrina. In 2004, only 12 percent of historians were ready to place Bush dead last.

Here are some of the comments that the historians furnished:

“No individual president can compare to the second Bush,” wrote one. “Glib, contemptuous, ignorant, incurious, a dupe of anyone who humors his deluded belief in his heroic self, he has bankrupted the country with his disastrous war and his tax breaks for the rich, trampled on the Bill of Rights, appointed foxes in every henhouse, compounded the terrorist threat, turned a blind eye to torture and corruption and a looming ecological disaster, and squandered the rest of the world’s goodwill. In short, no other president’s faults have had so deleterious an effect on not only the country but the world at large.”

“With his unprovoked and disastrous war of aggression in Iraq and his monstrous deficits, Bush has set this country on a course that will take decades to correct,” said another historian. “When future historians look back to identify the moment at which the United States began to lose its position of world leadership, they will point—rightly—to the Bush presidency. Thanks to his policies, it is now easy to see America losing out to its competitors in any number of areas: China is rapidly becoming the manufacturing powerhouse of the next century, India the high tech and services leader, and Europe the region with the best quality of life.”

One thought on “Worst. President. Ever.”

Lara Gardner's Weblog by Lara Gardner is licensed under a Creative Commons Attribution-No Derivative Works 3.0 United States License. This means if you use anything from this page, you must properly attribute the work to Lara Gardner and provide a link back to its original location.
Loading Comments...
Comment
×