My mom had a stroke on Sunday. Such a weird thing to have happen. Not so much I suppose, but I spent 2 days saying the words out loud to try and make them sink in. Really? She had a stroke? My mom is officially old. It sneaks up on you, this aging thing.

The stroke has brought enormous stresses because my parents are dysfunctional in the extreme, particularly my step-father. He brings criminals and misfits home to live with them because of some delusional, misguided fantasy of recreating his delusional, misguided childhood. He does not ask my mother. He is like an addict in his behavior, filling up on drama. He used to drink, but quit during my teens, trading the booze for chaos. I will get drunk on that instead, his mind seems to say.

My mother is the long-suffering wife who is not asked permission and does not insist on it. She has stayed in this misbegotten union, the first excuse being that she stayed for the sake of my brother when he was growing up, the second being that she did not want to give up their beautiful land. Neither is a valid excuse or a real one. Both are destroyed as a result of this hapless pairing. No two people are more ill-suited to one another than these two and together only bad things happen.

These two people (ages 68 and 69) are also raising my brother’s child, a 6 year old girl, taken from her drug addict, ex-con mother after she was abused violently as a toddler while my brother was in prison. My niece is better off with my parents than she would be with her mother, but that is not saying much. They are too old and neither has strong parenting skills. Even without the crazy criminal running around, I have been gunning in the background for a change for her. I think the best option at this point is for her to live with my sister. My sister may be a fundamentalist Christian who raises her children to smile even when they feel sad, but this is far preferable to the situation the child is in now.

My parents live on a farm. They have cows. A month and a half ago, a cow who was protecting her calf gored my step-father in the stomach. (Yes, cows have horns. It seems to be the first thing everyone says, that they thought only bulls had horns.) It was the most bizarre situation. The horn did not break the skin, not one bit. Yet after the goring, there was clearly damage. He was taken to the hospital where exploratory surgery revealed that the horn had split the muscles lining his gut like a scalpel. The 8 inch slice went clear through, and his intestines were poking out. Yet the skin was fully intact. The doctors had never seen anything like it. They cut the skin open, poked the intestines back in, and sewed him back up. The point of this story, here in the middle of all this other chaos? The cow has chased my father again. She is dangerous, pure and simple.

And finally, the latest ex-con, drug addict my step-father dragged home has been stealing from them and has threatened their safety. My dad has been parking his car at the end of their driveway (the fabled driveway I walked down as a child in rain or snow or sleet), sleeping in it with a gun to protect his precious stuff from the lunatic. I have to wonder whether the label has not been comprehensively applied.

Toss into this salad of insanity a stroke. I have little doubt the stroke was induced by the stress of bull goring, the out-of-control 6 year old, and the crazy criminal drug addict causing all sorts of drama and disharmony.

Tests revealed that my mother’s carotid artery was filled with plaque. For as long as I can remember, my mother has worried about her cholesterol. She is one of those people for whom eating is a chore because she is counting calories and examining labels and worrying and fretting over this cholesterol level. It always seemed to me if she would just eat actual food, stuff that grew out of the ground or walked on the earth, and then tossed in a bit of exercise, she would be fine. But it hasn’t been as simple as that for my mom. She still eats things that have an ingredients list, always tries to fit in substitutes for real food, and does not exercise at all.

Because of the plaque, Mom’s brain has not been getting enough oxygen, which explains her increasing confusion. Because of the stroke, she got surgery to remove this plaque, and will get medicine to keep it at bay. Her brain is now filled with the blood it was so desperately lacking. The doctors can’t do anything about the enormous stress, however. That change is up to her. And us, I imagine.

At the hospital the day before surgery, my sister and I staged an intervention of sorts. We brought in hospital staff to help us explain to my mother that she and our niece are are first priority and that neither can go back to the insanity that has been their life. It cannot happen.  There is too much risk, the obviousness of which cannot be overstated.

Someone asked me the other day if I date. I laughed. Right. When? When would that happen? And who? If I had time, which I don’t. If I had interest, which I don’t. And I would be almost embarrassed to have to explain my family to a normal person. I do not participate much in the drama train. I moved away a looong time ago. I get most of my information about these situations second-hand. Whenever I visit, it’s enough to keep me away for months again at a time. It frightens me. It frustrates me. I don’t want my children exposed to it. My children have such a different experience than I had that they are confused by the chaos there. I have not been able to change it; that’s their job. Growing up, I was the black sheep Cassandra who spoke out against it and was punished for it. I’ve come to terms with this, grieved it, accepted it, forgiven it, and moved on. How else could I ensure that I did not pass the insanity on to my own children? I decided long ago, long before a child should ever have to make such a decision, that my children would experience a different reality.

Yet here it is again, the crazy train. I guess I’m glad that I don’t bring my own emotional upheaval to the mix in trying to deal with it. If I were still angry, if I had not worked through all those old feelings, I don’t know how I would have reacted to all this. But it’s weird. Every time we think we’ve escaped, it seeps back into our lives. You can never completely get away.

This is why the words don’t come. My attention is directed in too many directions. I have so little time. I only managed this because I can’t sleep in the light, even if it’s light peeking around light-blocking shades, and I can’t sleep after I have risen, even if it’s at 5:34 a.m. My bladder wakes up with the sun and forces me out of bed, and I can’t go back to sleep. So today I got up, picked up the computer, and wrote this. Sleep would have been more satisfying for me, but oh well. Maybe someday life will free itself and the words will come again. I genuinely hope so.

My friend and I were fooling around on Meetup. I would put in a term to search for groups and see what Meetup came up with. I put in the term Sociopath. Meetup came up saying, “There aren’t any sociopath meet ups near Portland just yet.” Meetup then offered some alternatives that are slightly close and might suit me. Note what choices it offered: 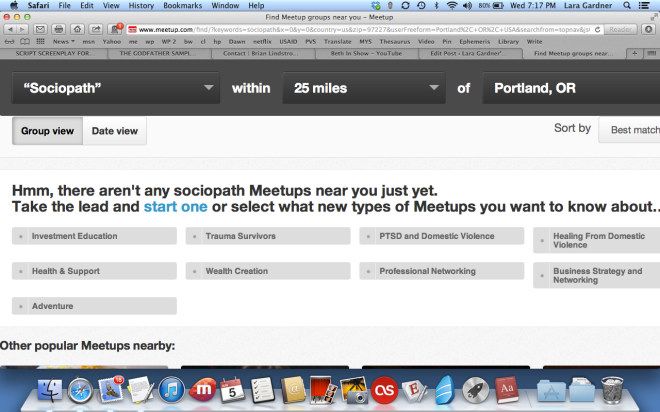 It offered Investment Education, Wealth Creation, Business Strategy and Networking, and Professional Networking. Isn’t it ironic that Meetup thinks a sociopath group would fit with these business groups?

Lara Gardner's Weblog by Lara Gardner is licensed under a Creative Commons Attribution-No Derivative Works 3.0 United States License. This means if you use anything from this page, you must properly attribute the work to Lara Gardner and provide a link back to its original location.