Every Friday since August 23, I have noticed and looked at the clock at 11:45 a.m. and thought of Ava. It has only been three weeks, so it’s likely this will stop soon. Then one Friday afternoon I’ll look at a clock at 12:30, or 2:00 and realize I didn’t notice and tears will form. It isn’t because I’m a bad person, but because I’m a normal one, and in order to go on in life, I can’t be looking at a clock every week remembering the moment she died.

I wish I knew the time of the day I first met her. It was some time in the afternoon on April 11, 2009. We had been to a movie at a theater next door. We played with her and several other puppies, then zeroed in on her. After 45 minutes, she needed her puppy nap and we needed to go to dinner with friends. As she lay on her side on the floor inside her puppy kennel, I reached in and put my hand on her side and she sighed. I felt complete love in that moment. 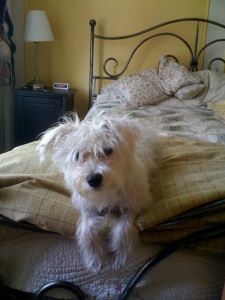 Then we left. I did not expect to see her ever again. I did not know that when we returned home at 11 that night our dog would die within 10 minutes of our arrival. When I woke up at 3 heartbroken and lost at everything that had happened that week culminating in the death of our dog, I knew my daughter was leaving to go to her father the following day, Easter. I knew after everything I could not come home to an empty house and all the grief that was a part of my soul. I remembered that puppy, remembered the moment that passed between us when my hand covered her heart, felt something immediate and visceral and complete, something other than grief and loss.

I decided lying there that I would call the store in the morning and offer them less than half the asking price for her. If they were open on Easter and they would take my offer, I would go and buy that puppy. I have never paid for a puppy in a pet store before.  I don’t really believe in it, considering all the unwanted animals up for adoption. But at that moment, I did not care.  In this decision in the pre-dawn hours, I was finally able to sleep.

First thing the following morning, I awakened feeling like I had a hangover. The morning was damp, classically spring-like. I told Milla my plan. I searched online for the number of the pet store using google maps to find the movie theater, then street view to find the name of the pet store, then googling the name to find the number. Together we called them. At 9:30, they answered. When I described who I was and made my offer, there was no hesitancy. They accepted on the spot.

Walking from the subway in Washington Heights to the pet store later that morning, as we paused on a curb to cross the street, my ex asked me whether we should name her Ava or Gloria. In unison, Milla and I said, “Ava.” It wasn’t until days later that I got it. My last name is Gardner. His is Gaynor. Ava Gardner or Gloria Gaynor. It was a joke, but it became Ava’s name and we never considered another.

I loved Ava from the moment I knew her. I loved her before I knew she would be mine. I loved her completely and fully and this love got me through the lowest point in my life. I credit her with saving my life, I was that low. Love will do that for you, give you the gift of life when you’re sure you can’t make it through. Even after Isabel was born, I kept loving Ava and kept her close. She was present for Isabel’s birth. She was a little light in all of our lives.

Back in May of this year when Ava was poisoned and almost died. I went there in my mind and imagined the possibility and could not bear it. After that incident, Ava stopped running away. She used to like to leave for 20 minutes or a half hour and roam the neighborhood. It only happened a handful of times, but one of our neighbors really hated this, even though she didn’t do anything. After the poisoning, even if she wasn’t tied up, she would not leave. I don’t know what changed for her — did she understand how close she came to death? I did not know, but I was grateful for the change.

Now she is gone and I wonder if Death felt thwarted back in May. Determined to do its deed, it took her from us when we least expected it, leaving us all reeling. Isabel lost a member of her family. She is only now getting her rhythm back. She doesn’t get it. Out of the blue in the car yesterday she said, “When we die, our bodies become the earth. Is Ava now a part of the earth again?” She has asked multiple times if the fish are going to send Ava back to us. I have tried to explain, but she doesn’t understand. Milla seemed fine within a few days, then last week I found her sobbing at the bottom of the stairs. “I miss Ava,” she cried. I held her and cried too. We all do.

It gradually recedes. I have to fight the guilt at not grieving 24 hours a day, but we can’t live like that. If Ava could have understood such things, I cannot imagine she would have ever expected us to stop our lives at this loss. Most of the time I want to crawl into bed and stay there all day, but I can’t, and really, if she could understand such things, would she want me too? I think not.

I miss you Ava. Your life was too short, but you brought me hope and love. Thank you, little friend.

Lara Gardner's Weblog by Lara Gardner is licensed under a Creative Commons Attribution-No Derivative Works 3.0 United States License. This means if you use anything from this page, you must properly attribute the work to Lara Gardner and provide a link back to its original location.
Loading Comments...
%d bloggers like this: