Today Isabel is two weeks old. She had an adventurous day, of sorts.  Considering she slept through most of it, I’m not sure how much of an adventure it really was. 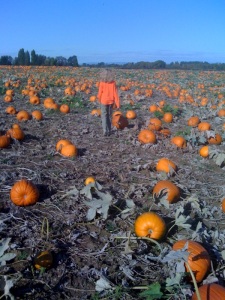 First we went to Sauvie Island to the pumpkin patch.  We were going to go to the main big one with the giant corn maze, but when we arrived at about 2 in the afternoon on a Saturday a couple of weeks before Halloween, we discovered that everyone else in Portland had the same idea. There was a line of cars a half a mile long on the road to the patch so when we got there, we just kept driving on past the patch.  We told Milla we would come back during the week when things would likely not be as crowded.  She was amenable to this when she saw the crowds and lines.  We drove on around part of the island and in the process, discovered another, more unknown pumpkin patch with animals, caramel apples, a smaller corn maze, a hay maze, hayrides, orchards, and flowers.

Milla and Daddy went off in search of a pumpkin while Isabel nursed on my lap as I sat on a hay bale under a fruit tree. The sun was beaming and warm, and sitting under the heat nursing baby Isabel was quite pleasant.  After she had milk I changed her diaper in the shade under another tree.  By then Milla had found her pumpkin.  She and I and the baby went to check out the corn maze and animals, I picked out a pumpkin for me, and Milla picked out a little one for Isabel. Milla pulled the wagon up to the checkout where we stopped first to buy caramel apples and cider before heading on our way.  It was certainly an enjoyable afternoon.

Later in the day, Daddy was playing with the Portland Jazz Orchestra doing a tribute to Buddy Rich.  Isabel and I went to watch him.  The Jazz Orchestra is a 17 piece big band.  I sat in the way back because I expected the music to be loud.  It was loud, but Isabel slept through the whole thing.  The only time she wiggled a bit was after a piece when the audience erupted in applause.  She was not terribly fond of the clapping.  The music was fantastic and the stories from the band member who played with the Buddy Rich band in the sixties were entertaining.  It was a fun show.

After the show, right after I got Isabel strapped into her car seat, she pooped.  I removed her from the car seat and changed her diaper in the front seat of the car, bundled her back up, strapped her in the car seat, whereupon she promptly pooped again.  Silly girl!

Lara Gardner's Weblog by Lara Gardner is licensed under a Creative Commons Attribution-No Derivative Works 3.0 United States License. This means if you use anything from this page, you must properly attribute the work to Lara Gardner and provide a link back to its original location.
Loading Comments...
%d bloggers like this: